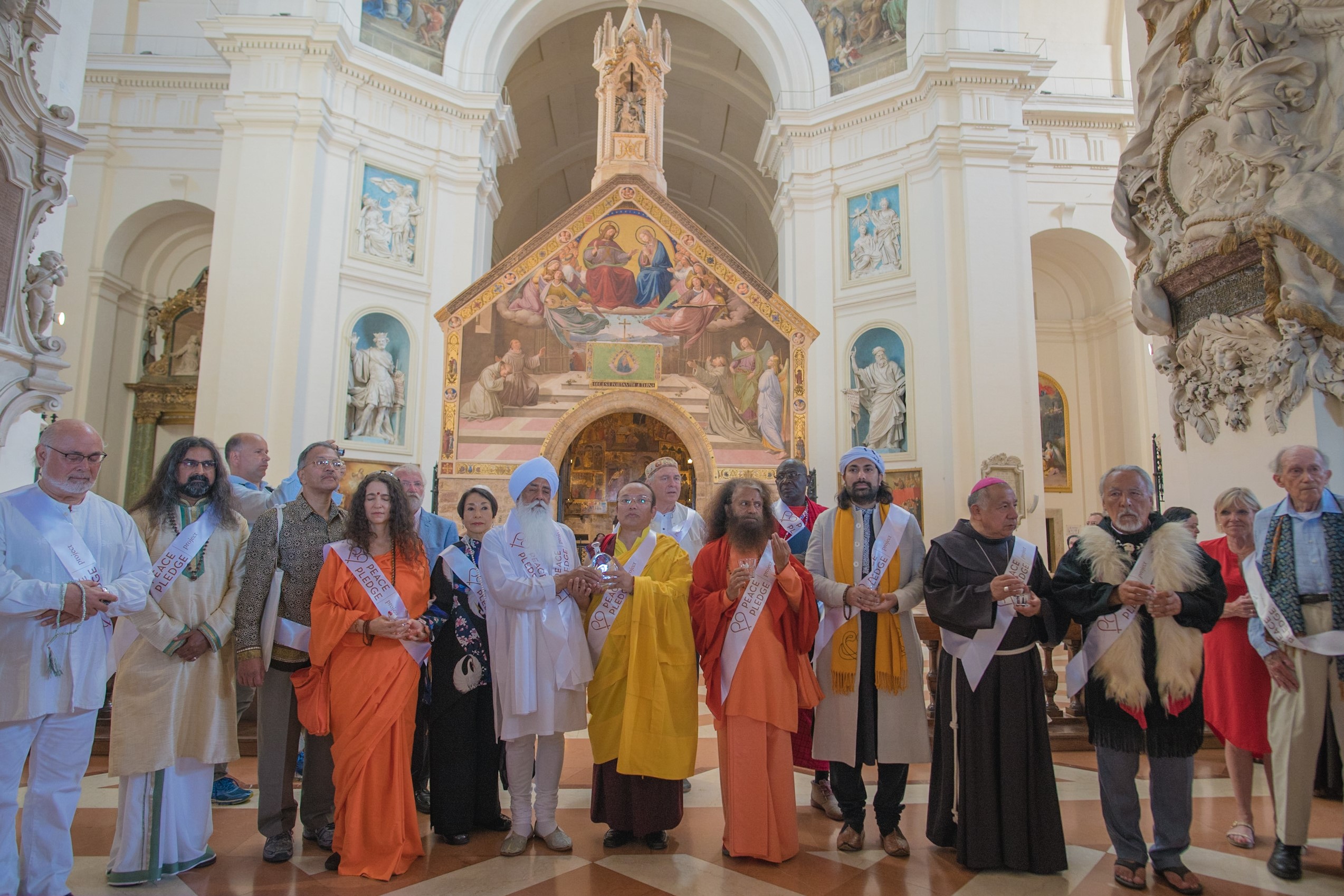 Posted at 12:00h in pilgrimages, press release by sido

From around the world, leaders of the world’s major religious traditions came together in Assisi, the home of St. Francis, as part of the Peace Pledge Pilgrimage Project; to pray, celebrate, and meditate together based on the principle that Loving-Kindness and Compassion can overcome discord and lead to human unity and peace.

They pledged to share a Peace Pledge [www.peacepledgeproject.org] with world leaders, the United Nations, religious leaders, Parliamentarians, and billions of people inviting them to join the affirmation of the necessity and supreme importance of Loving-Kindness, Compassion, Forgiveness and Reconciliation. This simple truth they believe is transformative and universal.

His Holiness The 12th Kenting Tai Situpa emphasized that Loving Kindness and compassion is base of everything ,very existence of ourselves is because “we are nurtured by mothers milk and protected by her compassion right from the birth “ He also strongly emphasized “ we are 99% water ,without it we will be a pinch of dust” there for taking care of environment is crucial, at the same time through experience being in Greenland, the melting of ice has to be ,not only harvest but it has be stabilized to its nature flow “ By the Ice ,

Bhai Sahib Mohinder Singh reminded us that first and foremost those who want peace must themselves be at peace and that peace within and amongst religions is a pillar of world peace. Swami Chidanand Saraswati said, “We can either be at peace or be in pieces. The choice is now.”

Prior to coming to Assisi, the peace pilgrims flew to Kangerlussuaq, Greenland and then on to the Greenland Ice Sheet to witness the enormity of the tragedy of its melting.

Eskimo Elder Angaangaq Angakkorsuaq said: “It is the human heart which needs to melt. This is a priority if we are to stop the melting of our mother ice.”

From Greenland, the leaders travelled to Assisi and gathered for three days of intense dialogue and prayer. They were joined by many other faith leaders, scientists, and activists who had come in from around the world including India, United Kingdom, Serbia, Kenya and the United States of America amongst others.

Sacred water from Gangotri, the glacial source of the Ganges River in the Indian Himalayas, and the sacred water from Greenland were ceremonially mixed together into a heart shaped vessel, representing the sacred heart of humanity.  Rivers of tears flowed from the eyes of the faith leaders as the sacred water was poured to the sound of prayers from the Muslim, Hindu, Christian, Jewish, Sikh, Buddhist and Indigenous traditions in the Porziuncula within the Basilica of Saint Mary of the Angels, Assisi.

On the following day the leaders carried the sacred water into the Basilica of Saint Francis of Assisi, where St. Francis’ physical form lays in rest.  A global peace prayer was held, in which more than ten internationally renowned faith leaders said prayers and pledges for peace, with followers connecting from around the world via social media. Bishop Ruben Tierrablanca welcomed this interfaith community and expressed the importance of all of us learning from the love that St. Francis lived.

“It is no longer enough to simply pray for peace,” the leaders agreed. “Like St. Francis, we must also serve and actively work for peace”.

The Peace Pledge Pilgrimage Project is an interfaith initiative led by the former Director of the International Monetary Fund and former Vice Prime Minister of the Netherlands, Johannes Witteveen, along with over a hundred spiritual and religious leaders, representing all major religions, from all over the world. Collectively this group represents tens of millions of devoted individuals.

The Project’s last pilgrimage gathered at the Peace Palace in the Hague where the International Court of Justice and International Criminal Court convene. Before that it travelled to India’s sacred places and received the good wishes of Prime Minister Narendra Modi.

The Peace Pledge will be shared with tens of millions of participants at the upcoming Kumbh Mela in Allahabad, India in January/February 2019, the largest spiritual gathering on earth, as well as up to 50 million youth in the KidsRights network.